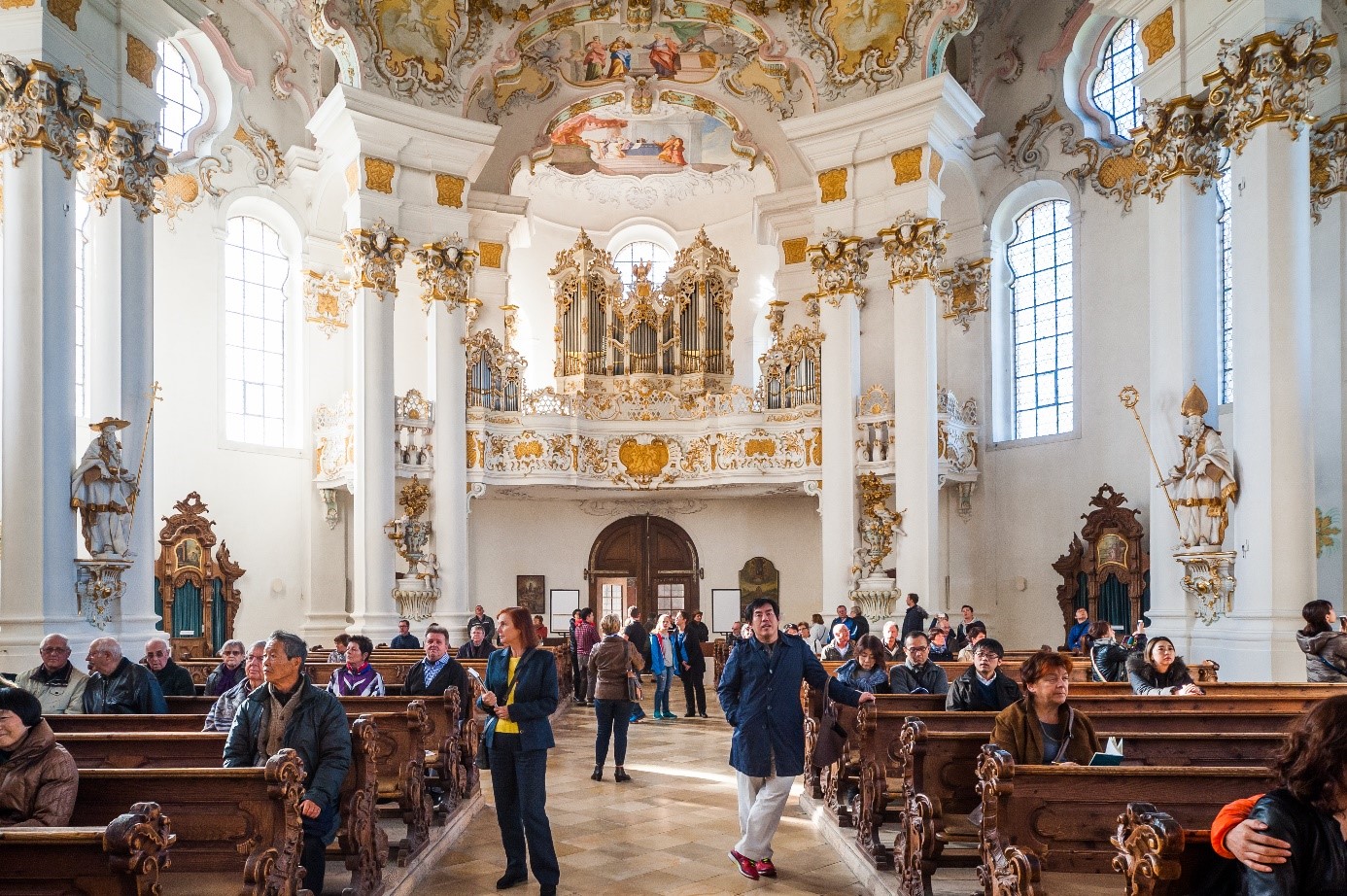 Christianity has experienced heydays and declines as well. We are in a period of decline today. Various elitist groups, including sophistic Freemasons, socialists and communists, have set themselves the goal of destroying Christianity or changing it in such a way that it merges with the other world religions and thus forms a One-World-Religion. In this new religion, there is no longer a God, but Man is the new God – not the ordinary man, of course, but Freemason Man, because only he, according to Freemasonry, is entitled to the predicate „Man“. All others are only on the level of imperfect and sinful „beast men”.

In order to achieve their goal, the „One World Religion Fanatics“, who are in leading positions in our society and who control many areas, especially the media, have for several decades been pursuing an unbelievable course of destruction against Christianity, the world’s largest religion. Not only have they infiltrated the Vatican, i.e. the Church from within, with beings from their ranks, who they have smuggled in, they have also manipulated (and continue to manipulate) the people of this world by making them aware of the corruptness of the Church. They also spread theses that neither God nor Jesus Christ exists, but that these are mythological stories and fairy tales that have no place in the life of the enlightened man. Modern, enlightened people need neither God nor Jesus Christ, indeed; they do not need religion at all. The only religion that makes sense and is useful is the belief in the communist one-world state and its leadership. They are the new gods (idols) to worship.

People, Christians respectively who are already a little older and still know the status of Christianity from the 1950s and 1960s, i.e. before the unfortunate II. Vatican Council (1962-65), have been able to experience and to follow the decline of Christianity at first hand. What was once the Star of David is now the Christian Cross, and it would not be a miracle if in the not too distant future Christians were persecuted and interned as prisoners in concentration camps.

It is unbelievable how Christianity is being denigrated as a model of religion, so that more and more believers leave the church and turn away from God and Jesus Christ. With those who remain in it, the Christian faith becomes weaker and weaker, so that they are still de facto Christians, but no longer by heart. The Christian education in schools and families is declining or is being falsified in such a way that the younger generation has hardly any reference to Christianity and to Jesus Christ, since he was supposedly just a man like any other, a preacher, a religious teacher, and fanatic. Very few people today know what Jesus Christ really was.

It is therefore of fundamental importance for the true enlightened person today not to blindly follow the anti-Christian current as it corresponds to the Masonic plan, but to deal with the true doctrine, to inform himself and thus to learn and internalize the real meaning of Christianity. To do this, one has to deal with works that come from the remains of traditional Christian groups, because only they show the gradual destruction of Christianity and the plan behind it.

In this way, one can come to the realization that Christianity is not just one religion-model among many like Islam, Buddhism or Hinduism, but that it is „the super-religion-model“, if one wants to speak of a religion model at all, because strictly speaking Christianity is much more. So what is Christianity? Here the author can only express her own opinion:

There is undeniably God, the creator and ruler of this universe and of all that is, God who created man as Adam and from him Eve. God also created the angels, from himself, so they are aspects of him. However, he did not create man from himself, but from matter in the form of clay. He, God, has breathed into him, his human creature, his breath of life, and given him a soul. This distinguishes angels from humans. Both, however, are based on God.

From aforementioned, one can see that God is a multiple being, which in its innermost essence has different aspects. Which aspects are involved can be seen very well in the Christian Trinity: God Father, God Son (Christ) and the Holy Spirit. This Trinity is within God. Neither the angels nor man are involved in this Trinity, but are outside of it. God the Father is the Creator, God the Son is Love, and God the Holy Spirit is the element that connects and sustains both and corresponds approximately to what is called consciousness. All three are central powers in which God’s creations are integrated, including man.

The God Son, Christ, has incarnated in Jesus Christ as a human being in this world – at the request of his God Father. He taught in the name of God to help people in the time of darkness and he sacrificed his earthly body and his humanity and thus brought salvation to the people. He, Christ, who is God’s expression of divine love, has made divine love flow into this world and to people through his sacrifice. The greatest love is to sacrifice one’s life for someone in order to save the life of the other. In every service, in the Eucharist, this sacrificial act of Christ is repeated and love flows to the faithful in the form of the Host. It is therefore an act of the greatest love to which the believer(s) surrender and which they are allowed to experience. The one who prepares and carries out this act is the priest – in the name and on behalf of Christ.

If man now asserts that there is no God and also no Son of God, and likewise no Holy Spirit, yes, he does not need this Trinity at all, and it would only constrict him, then he is clearly in what is called pride. How can man presume to believe that he is authorized to be his own God and no longer needs the true God? Does he not know that there is only one God, and that all others who presume to be God are nothing but idols? We must realize one thing: We live today in a time of idolatry. We worship Hollywood stars, princesses, state leaders, billionaires and many others.

However, there is one thing all idols have in common: at some point, they will be toppled from their pedestals. But God is eternal! If humanity now believes that it has overthrown God or Christ from the throne, then it is in the greatest misbelief. No one can overthrow God or Christ from the throne! Those who are deluded do not realize that they are not sitting on the throne of God, but on the throne of the devil, who lures his followers so that they no longer worship God, but him, the devil. However, he only apparently gives them his throne, for in reality he pushes them down into hell as soon as they have taken a seat on it. Thus, he has fulfilled his ministry on behalf of God, which consists in leading men into temptation and testing to what extent they are humbly devoted to God.

© Copyright of the article and photo by Helene Walterskirchen www.helene-walterskirchen.de